Rules of the Georgian Backgammon game

• Backgammon game takes place on the Backgammon Special Board between two players before the advance account is reached.

• Both participants play with one pair of dice on the board, and the players' door on the board is pre-selected by agreement or voting (with dice rolls).

• In order to achieve a predetermined account, players may have to play one or several hand-held games.

• The stone is coming to the opponent's player in the corresponding column in the dice rolled. If all the columns are busy, the player leaves the move.

• Removal of stones from the dust can only be done if the player has all the stones in his / her own door, from the corresponding column on the dice.

• If the player's stone dies in the process of withdrawal from the dash, it will continue to pull the stones out of the tray only after the stone returns to his own door.

• The player is obliged to play the maximum level of driving on the rolled dice.

• If the combination of both the dice can not be played and the player plays one by one, then the player is required to play the maximum between these two movements.

• If the player can not play any of the cobins on the dice, in this case the move goes to the opponent.

• The player’s dice are on the board until the end of the turn. A move is considered complete only after the player has made a move. It is not allowed to return the move made by the player.

• The hand is handed over to the player who has brought his stones out of the playing ball.

• Switching Cube is used when the game is more than one account, which makes the player double in the current hand. It is possible to move the hand over the back through the Cuban and so on. (2,3,4,5,6).

• The player may agree to offer a double-handed offer or surrender to the opponent. The consent is confirmed by placing the cube on the side of the board in the special drawer (above the corresponding digit). In the event of the resignation, the player is liable to offer the position of Cuba before the offer.

• Any player has the right to dispute the first dispute, after which it is permissible to increase the status quo in the above sequence only for the second player, and so on. In turn, before rolling the dice in front of your own move.

• Outcome achieved by hand winnings can be equal to one (oinine) or more (mars, cox) at the end of the game.

• Oni means when the opponent has one stone still at the moment of the end of the game (simple victory).

• Mars means when the opponent does not have any stone in the game (doubling the hand account) at the end of the game.

• Cox means when a player completes the game at the end of the game, the player still has one or the other enemy in the door and no one has a stone (dropped out of hand).

• The player has no right to kill the opponent's stone in his own goal and play the stone in order to hide. 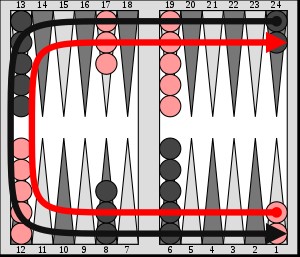